In the Bronx, Rental Aid Can’t ARRIVE Too Soon

Yoselyn Gomez dreams of a future in which she can work in her community and earn more than minimum wage.

After being laid off from her customer service job at the start of the pandemic and remaining unemployed for more than a year, Gomez, 62, had to take a $15-an-hour seasonal retail job at Macy’s in Herald Square. She wakes up at 3 a.m. each day to commute from the South Bronx to her job in Midtown by 6.

Despite all her efforts, she is 12 months behind on rent and other bills. She often must rely on food banks for sustenance. And she’s afraid of what comes after New York’s eviction moratorium expires on Jan. 15, 2022.

Gomez applied to the state Emergency Rental Assistance Program (ERAP) in June for 12 months of rent and utility relief. Even though her application was approved, the landlord who owns her $1,600-a-month two-bedroom apartment in the Melrose section said he has yet to receive reimbursement.

Now as Gomez waits, she calls in to ERAP numbers and helps friends navigate the process as well.

Gomez is not alone: An estimated 280,000 New Yorkers have applied for funds from the program, which launched on June 1 and was paused on Nov. 15. (New York Gov. Kathy Hochul requested $996-million from the federal government to revive the program in November.) Many who have been approved are also still waiting for funds.

To be eligible for ERAP, New Yorkers must have faced financial hardship as a result of the pandemic, have  a gross household income at or below 80 percent of their area’s median income, or have missed rent payments during the pandemic.

Checks were issued on a first-come-first-serve basis directly to landlords of tenants who applied. Tenants were asked for proof of income, residency and rental amount, which  landlords were required to verify. Should landlords prove difficult to locate, their payments would be set aside for 180 days until the state located them. Most recently, the state announced that it may redistribute 20,000 rent-relief checks that landlords have not yet claimed.

Most of these applications are clustered in some of the city’s poorest areas. 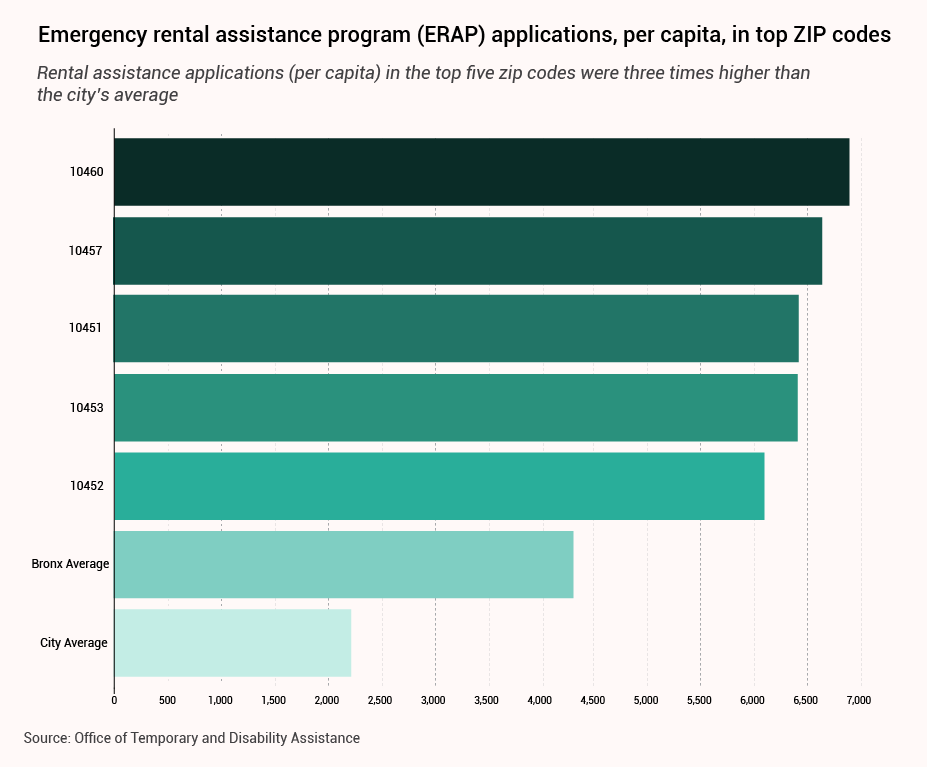 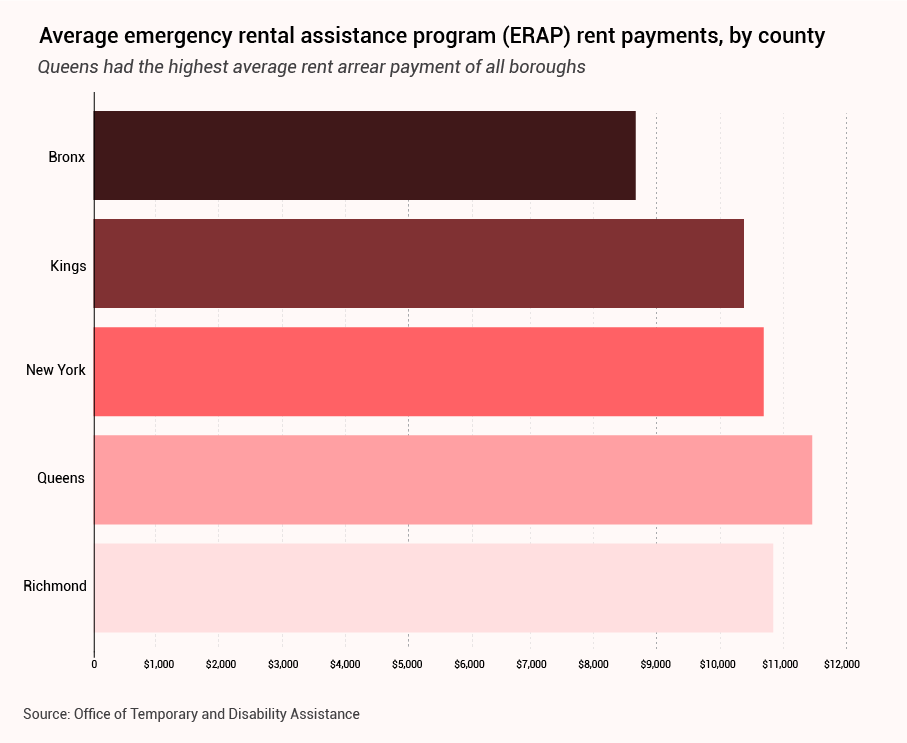 The pandemic has severely impacted the Bronx, where a pre-existing housing crisis has only been exacerbated.

“A lot of people in the Bronx were already faced with challenges long before COVID,” said Marie Edwards, a program director at the nonprofit BronxWorks. “We were dealing with low household incomes, high poverty rates, high unemployment rates before COVID.”

In Melrose, where Gomez lives, more than 3,000 residents have applied for rental assistance since June. The median household income of $30,349 is around what Gomez would make in a year on her $15-an-hour salary at Macy’s. Almost a third of Melrose residents are spending more than half their monthly income on rent, according to census data. Only around one-third say they speak English “very well.” 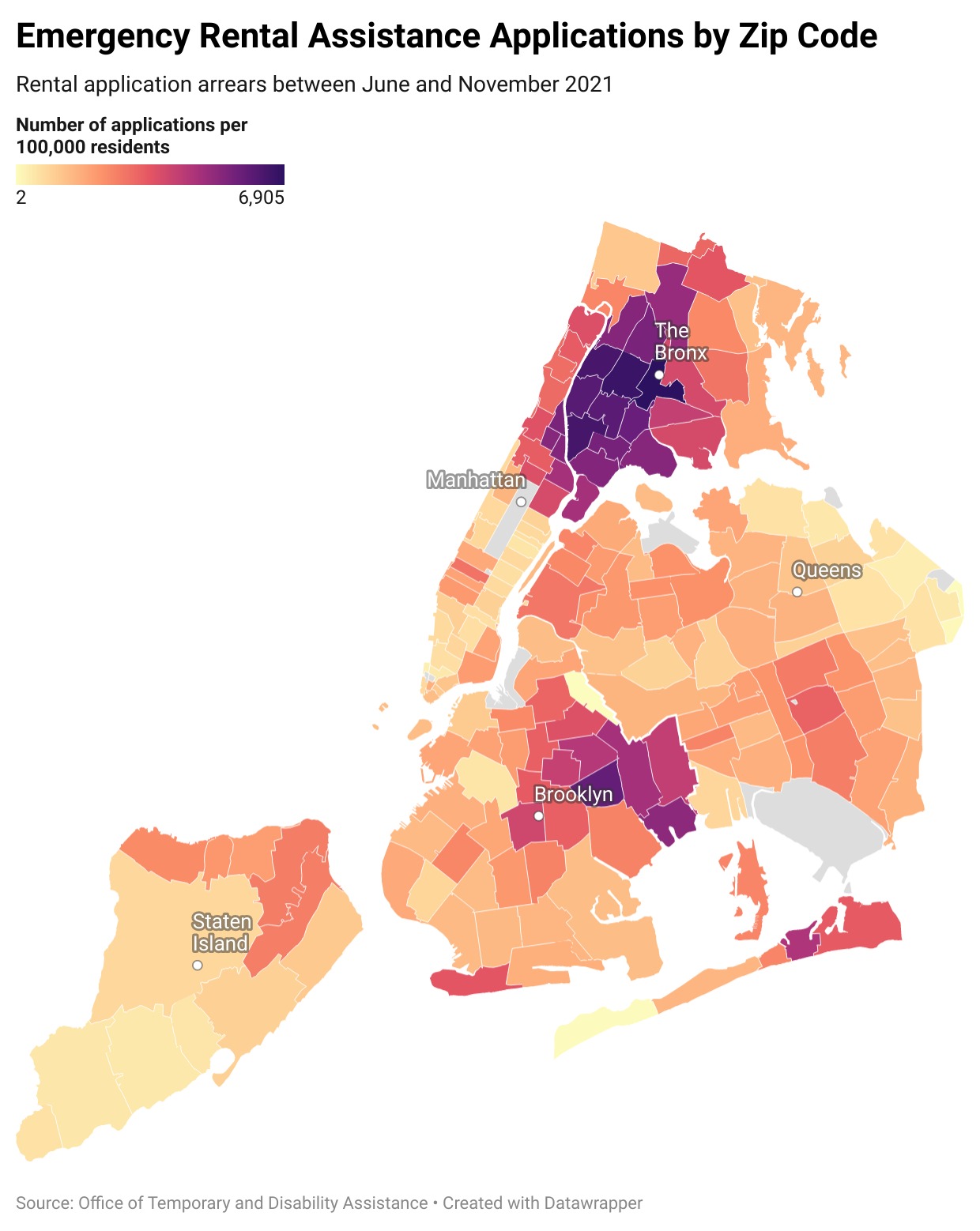 Nearly 70 percent of ERAP’s total applicant pool has yet to receive funding for one reason or another.

“Over half of our members who applied in June are still waiting,” said Pablo Estupiñan, a tenant organizer for Community Action for Safe Apartments, a Bronx-based organization that has helped members fill out the ERAP application. “It’s been a really big headache and a failure in terms of what our members have experienced.”

A program with a bad reputation

Among many Bronxites, government aid programs like ERAP have a reputation problem.

John Moros, owner of Alitalia Pizza and Palermo Liquors and Wines in West Farms, has avoided applying for small business grants, for example, because of the perception that the required tax records and paperwork privilege franchise owners and chains over small independent shops.

Moros, who saw business slow down during COVID-19, has worried about how he would make up the money for rent. He has yet to apply for ERAP—or any government aid—because he believes the application process is too laborious and could result in denial even after completing the process. 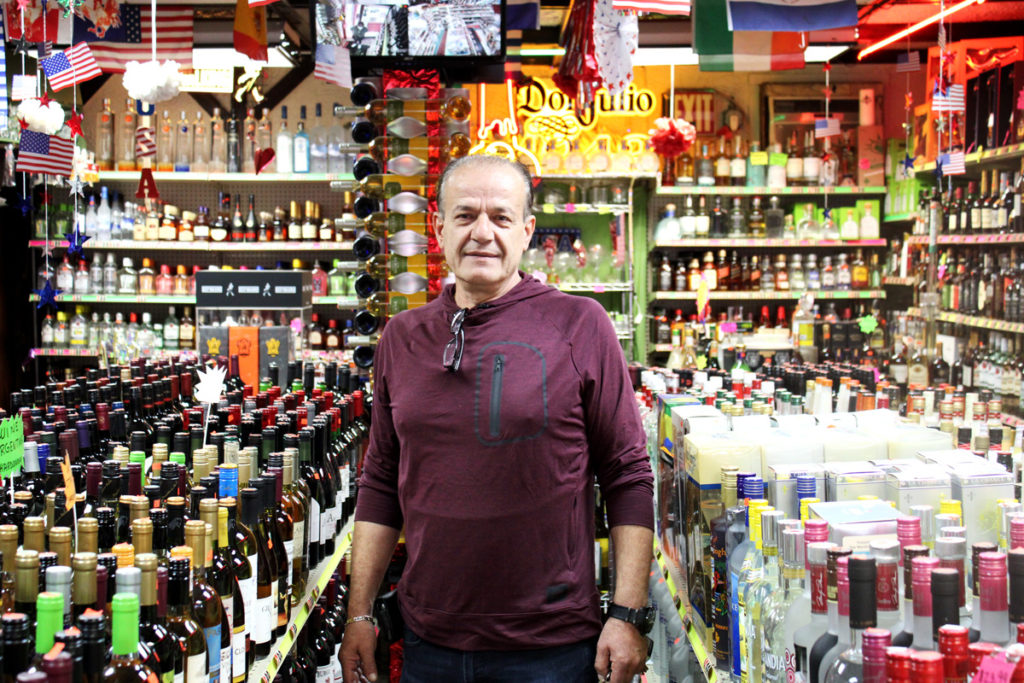 John Moros at his liquor store in the Bronx. (Annie Oberlink)

“For a small business, it’s very tricky,” Moros said. “You gotta have a lot of paperwork to provide, which we don’t have, because we’re a mom-and-pop shop.”

“Especially right now, business is down tremendously,” he added. “You use your credit card, you try here and there to survive.”

The tip of the iceberg

Application rates in the Bronx may only represent a small percentage of people in need. Many may not apply to the program because they don’t understand who qualifies, or what kinds of expenses are eligible.

Lorean Valentin, program coordinator at Bronx mutual aid group Mission Helping Hand, said that a number of prospects she’s assisted with ERAP applications did not know they could apply for both rent and utility payments.

“That was the thing that was confusing,” Valentin said. “They thought that if you applied for one, you couldn’t get the other.”

Advocates say language barriers, limited access to the internet, time considerations and poor marketing around the program have kept many deserving New Yorkers from applying.

“The Bronx was severely impacted because of the lack of access to resources. There was a huge digital divide,” saids Valentin.

Nearly 40 percent of Bronx residents do not have broadband internet at home, according to a 2020 report from the mayor’s office. Many residents who still rely upon federally subsidized phones provided to low-income recipients in a decades-old program that was expanded in 2012 under President Barack Obama have limited ability to use the internet.

“Not everybody had tablets. Not everybody’s kid had a computer,” Valentin said. “Or if they did, they were sharing one and you have five people in a home or more.”

That’s what Gomez encountered when she set out to help her neighbors with their applications. A multi-step process that required locating and consolidating documentation was especially difficult for older tenants and those who don’t use computers.

After six months, no one in her building has received the funds they’ve applied for, Gomez said.

“We have been calling a lot of times,” she said, as the tenants continue to enlist the help of lawyers, loved ones and local politicians.

Now, all they can do is wait.